As I roam the internet daily for interesting World War II-related histories I come across a lot of photos. Usually, I save them, but I never really do anything with them. After reading Susan Sontag’s Regarding the Pain of Others last week, an essay on war photography, I thought it would be interesting to pick out fifteen photographs from my collection that I find beautiful or startling.

The phenomenon war photography is haunted by that most difficult of questions: is it art? The consensus seems to be, as Sontag says, that an artistic depiction of real-life tragedy is in bad taste. “Photography that bears witness to the calamitous and the reprehensible is much criticized if it seems ‘aesthetic’; that is, too much like art.” She mentions the photographs that photographers Margaret Bourke-White and Lee Miller took of Buchenwald, Bergen-Belsen and Dachau upon their liberation; these were not necessarily ‘better’ than those taken by anonymous witnesses or military photographers. Of course, she emphasises, these photos do not, in fact, represent what life in the camps was really like. All they represent is what life was like there once the Americans arrived.

Sontag’s argument is that even though photographs cannot help but depict the truth – unlike paintings, which can never completely approach reality – the way they are framed and what is left out of the picture can still cause debate on their true interpretation or meaning (supposing, of course, that there is one!). There are photographs that gain a completely different meaning when taken out of context, and there are photos that claim to depict one event but really show something else – like the famous photo of American soldiers raising the flag on Iwo Jima, which was in fact staged; the real flag-raising happened earlier in the day, and for the photo they selected a bigger one.

I set myself the task to go through the photos I had saved and picked fifteen I found beautiful or interesting. Are they art? Perhaps. I would not hang all of them on my wall. Some of them, like the photo of a person’s “atom shadow” or Lee Miller’s photo of a drowned SS-guard, certainly depict a horrible reality that was unique to this war, not an abstract suffering that represents the depravities of humanity as a whole. It would, as Sontag argues, seem crude to label these as art, frame them and hang them in a gallery. Yet one of the war’s greatest paradoxes was, of course, that the atrocities committed by the Nazis were committed by a literary people, sons and daughters of the Weimar Republic, lovers of Goethe and Beethoven, and that their cultural sophistication and barbaric actions could exist side-by-side.

In my opinion, together these fifteen photos represent not just the size of the conflict – from an armaments factory in the States, through the tunnels below London, to the airspace of Russia – but also the very diverse role of war photography. Sometimes its purpose is to record the reality, thus ensuring that what happens is not forgotten. Here, there tends to be a moralistic dimension to the photos, automatically turning the viewer into a voyeur who sees the horrors from their safe seat in the future. Sometimes it is used for promotional purposes, such as the photographs of women working in factories. The line between war photography and propaganda is often very thin. And maybe, sometimes its purpose is to create a more abstract, more artistic view of reality, in that it startles us, showing elements that are normally separate but are here brought together into a harmonious whole – soldiers attending mass in a bombed-out church, or a woman in a summer dress standing between shipwrecked metal behemoths on Omaha Beach. This includes depicting death, the biggest taboo, in ways that we are not used to in civilian life. In the Hiroshima photograph, death is chaotic force that has struck down millions of people at random, channeled by American pilots. In Lee Miller’s photograph, the death of the SS-guard strikes us as much more peaceful; he appears to be dreaming, as if he has “gone gently into that good night”.

The photos are full of contrasts: violent death in Hiroshima versus the desperate clinging to what makes life worth living in Stalingrad. A troop ship carrying thousands of soldiers home versus a single infantryman under fire on Okinawa, bundled up into what can seem like the loneliest position in the world. A sailor behind a sewing machine versus women assembling aeroplanes, together showing the upheaval of traditional gender norms that was one of the biggest social consequences of the war. A company of American communications officers setting up shop in a Greek temple dating from 700 B.C. And lastly, light versus dark: a tent punctured by bullets and shrapnel creates a magical effect, as if the persons in the picture are surrounded by fireflies, while anti-aircraft fire in Moscow resembles fireworks, or even shooting stars.

The shadow of a person standing on the steps, Hiroshima, Japan – 1945.
Source: photographer unknown, for LIFE Magazine. A woman standing on Omaha Beach overlooking the wrecks of several ships that were used on D-Day.
Source: © David Seymour for Magnum Photos.

Members of the Maori Battalion who had fought in Greece perform a Haka for the King of Greece at Helwan, Egypt, June 1941.
Source: photographer unknown, found here. 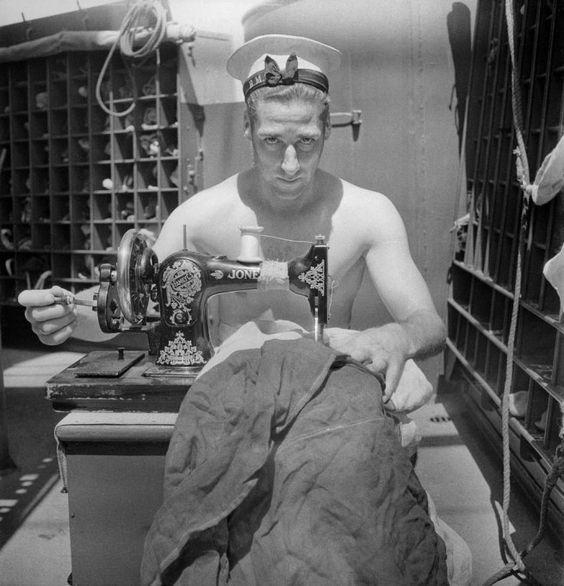 A sailor on board HMS Alcantara uses a portable sewing machine to repair a signal flag during a voyage to Sierra Leone.
Source: © Cecil Beaton, found at Imperial War Museum. 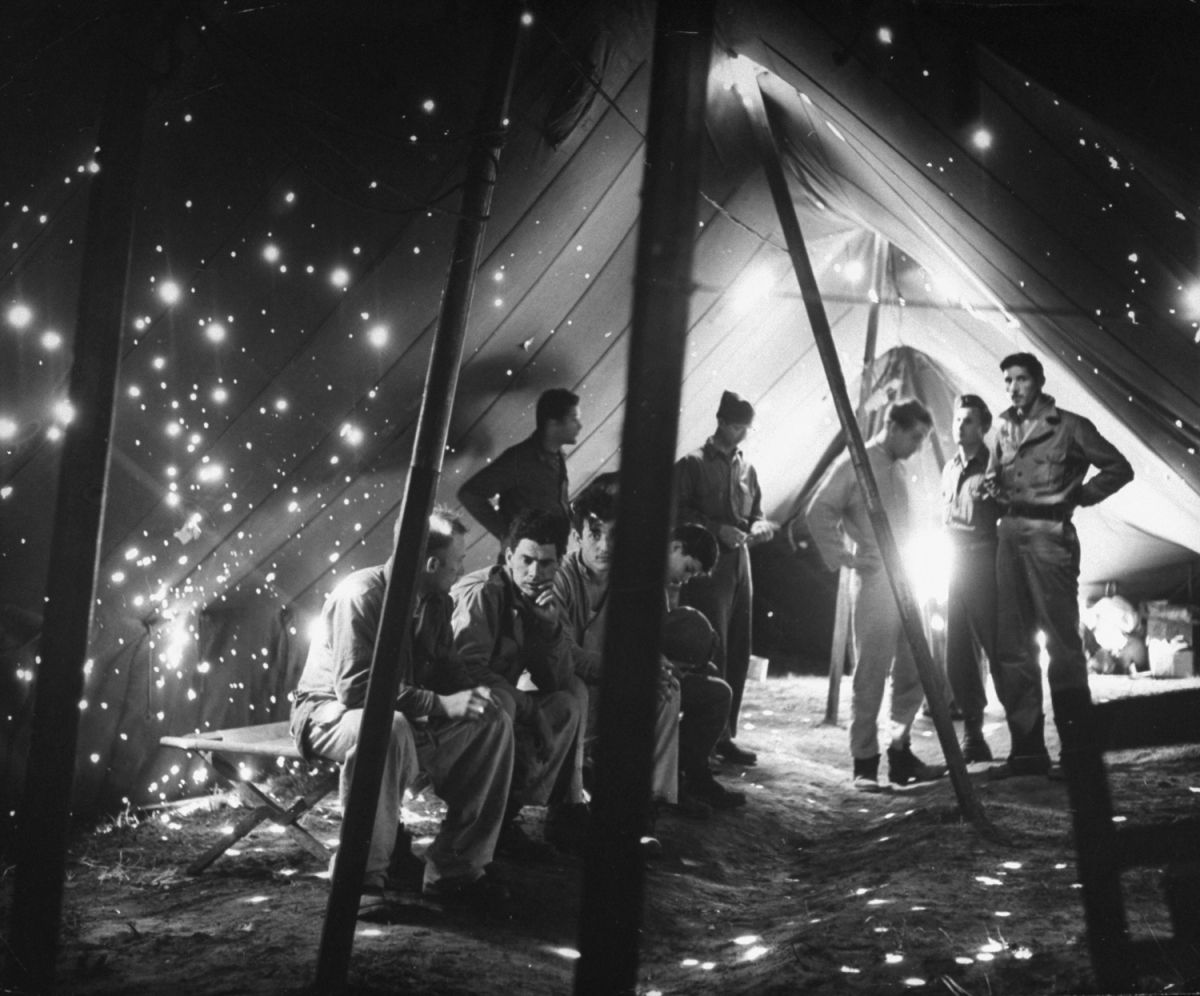 A musician saving his instrument during the Battle of Stalingrad, 1942-1943.
Source: © Emmanuil Ezvherikin, found here. 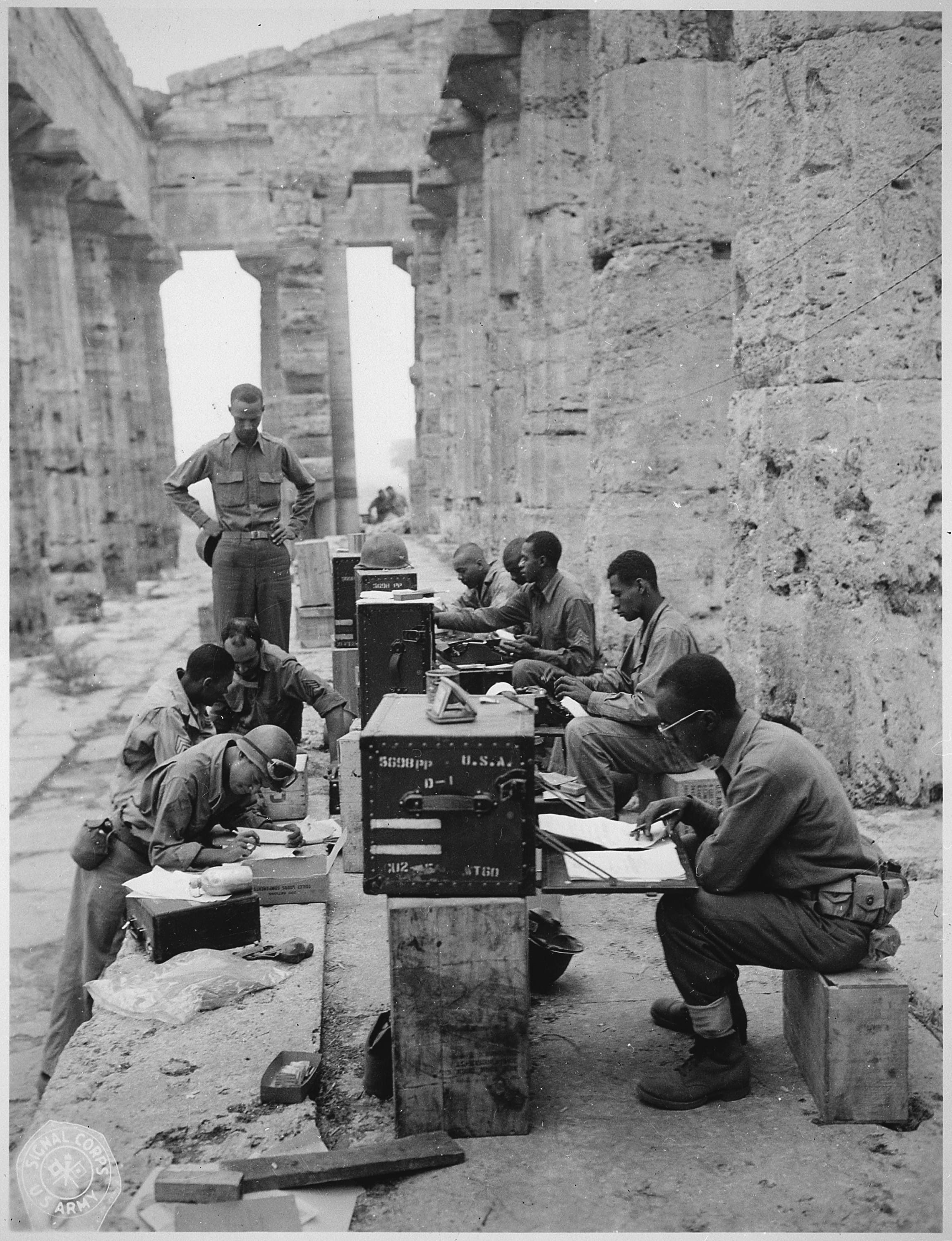 A company of men has set up its office between the columns (Doric) of an ancient Greek temple of Neptune, built about 700 B.C. Paestum, Italy. September 1943.
Source: photographer unknown, found here.

Burial at sea for the officers and men of the USS Intrepid (CV-11) who lost their lives when the carrier was hit by Japanese bombs during operations in the Philippines. Source: US Department of Defense, found here.